Every Night She Would Teach Me How to Play Her Mandolin

Thanks for naming the [chapter] "We've Come for the Davenport". One of the most elegant practical jokes ever played. But I will not be able to attend.

A friend is working on documenting the mandolin-club fad in the U.S., and Benchley was a part of that early in his writing career. I have lodged in the dusty recesses of my brain a Gluyas Williams drawing of Benchley trying very hard to play one, I think with someone trying to use a radio in the same room. Know which story that would be, which collection?

All the best,
Nick B. 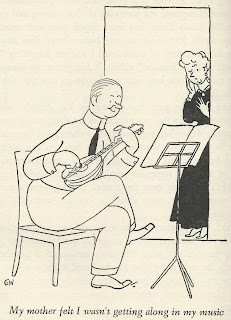 The illustration accompanies Mr. Benchley's essay "My Own Arrangement," which is found in Chips Off the Old Benchley (1949), beginning at page 240. The essay pokes fun at radio performers whose arrangement of popular tunes of the time bear little resemblance to the original compositions. While discoursing on this topic of "Hide the Melody," Mr. Benchley writes, "I used to practice the second-mandolin part at home alone. If you have ever heard a second-mandolin part being played alone without the air, you will understand why my mother felt that I wasn't getting along as fast as I might."

Speaking of mandolins, enjoy this in this popular song of 1920 (music by James V. Monaco and words by Edgar Leslie and Pete Wendling), as performed by Al Jolson.