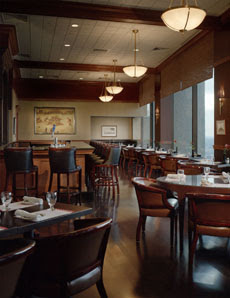 The Boston "We've Come for the Davenport" Chapter of the Robert Benchley Society will hold its monthly Roundup at the Downtown Harvard Club, high above Boston town on the 38th floor of One Federal Street, in the Financial District. We'll gather at the Crimson Pub on Thursday, March 20th, beginning at 5:30 p.m.
Dress code is informal or business casual. For more information, contact David Trumbull at david@robertbenchley.org.
Posted by David Trumbull at 5:16 PM No comments:

Another Inquiry from the Mail Bag

A recent book about Carol and John Steinbeck [the American writer] refers to Robert Benchley’s secretary as being a friend of the marine biologist and friend of John Steinbeck, Ed Ricketts. Apparently this secretary visited Mr. Ricketts home and laboratory in Monterey, California, sometime in the 1940s.

Do you have any information about this secretary and Mr. Ricketts and John Steinbeck?

Email ThisBlogThis!Share to TwitterShare to FacebookShare to Pinterest
Labels: Friends of Bob, Inquiries

The Thurber House cordially invites you to help Thurber House celebrate the 75th anniversary of the publication of one of James Thurber's most famous short stories, "The Secret Life of Walter Mitty!" Join us as we pay homage to the meek man with the wild imagination who inspired two feature films and whose name has become part of the world's vocabulary. There will be plenty of hors d'oeuvres and a cash bar. Don't miss the fun!

Posted by David Trumbull at 1:06 PM No comments:

Email ThisBlogThis!Share to TwitterShare to FacebookShare to Pinterest
Labels: Thurber

Dear Mr. Trumbull, I have 2 Robert Benchley books from the 1920s, both autographed. One is titled 20,000 Leagues under the Sea or David Copperfield which is autographed by Robert Benchley, Sr., Gertrude D. Benchley, Nat Benchley and Bobby Benchley. The two boys printed rather than signed their names. The inscription was "To Miss Moyer, with a great deal of Benchley affection December 6, 1928." This book has a large drink ring mark on the cover but is otherwise in good condition.

The second book is titled Pluck and Luck. It is signed similarly but has no "Sr" after the father's signature. It is inscribed "For the Benchley boys' "Miss Moyer." No date but the book is 1925 and the kids' printing is more primitive. It has a small stain on the cover.

I believe I obtained these at a sale at the Langhorne-Middletown Library in Langhorne, PA in the 1960's.

Posted by David Trumbull at 12:56 PM No comments: