Listen to "Love Conquers All" Online

You can now listen to Benchley's second book,  Love Conquers All, for free online at www.librivox.org. This wonderful site features recordings of over 1500 public-domain books read by volunteers. You can listen to streaming audio, or download mp3 files and/or podcasts. The Benchley offering is here. (Actually, this link is to the Internet Archive (http://www.archive.org/index.php), which indexes many audio sites in addition to librivox.org, so it's a good place to start exploring the wide variety of public domain recordings available on the web).
Since all the librivox readers are volunteers, the quality varies from book to book. But fortunately, the reader of Love Conquers All is very good. See the complete librivox catalog here.
Librivox welcomes volunteer readers, so, as more of the Benchley books enter the public domain, perhaps some of you out there in blogland will volunteer to do a reading. It would be great fun (if you can keep a straight face while reading Benchley -- no mean feat!)
The Internet archive also contains a link to a fascinating "movies for the blind" version of the complete soundtrack of the (now public domain) 1945 movie, The Stork Club, featuring Robert Benchley. It's available here for streaming or for downloading as three mp3 files. Each file has an excellent voiceover that unobtrusively describes what's happening onscreen, effectively turning the soundtrack into a self-contained "radio" show (They even read all the credits at the beginning). The main "movies for the blind" site is here. There aren't all that many movies available yet, but I highly recommend it.
(By the way, there's quite a bit of old-time radio material on the archive site. See for example the Henry Morgan shows here.)
- Chris Morgan
Posted by Chris Morgan at 4:06 PM 1 comment: 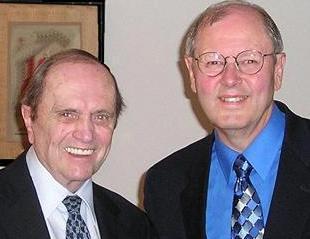 Bob Newhart, winner of three Grammy awards, a Peabody Award, an Emmy and the Mark Twain Prize for Humor, making him perhaps the most celebrated comedian, writer, humorist, actor, entertainer and former certified public accountant in show business. But this time he has taken on the difficult and amusing task of selecting and the top four winning entries in the 2008 Robert Benchley Society Award for Humor–a task ably handled for the past two years by Pulitzer Prize winning humorist Dave Barry."I think really good writing is timeless," Newhart said, referring to the work of one of his favorite humor writers, the renown Robert Benchley, whose liked to present a public image, "like the persona Jack Benny created—a man who was very much full of himself, but in a self-deprecating way." "The book that most impressed me when I was growing up and influenced my approach to comedy would have been any book by Robert Benchley, or specifically My Ten Years in a Quandary," Newhart said. "I was very much influenced by Robert Benchley."

"We had a delightful time selecting our top ten finalists this year," said Robert Benchley Society chairman David Trumbull. "It is a true honor to turn the job of selecting the top four essays over to Bob Newhart." "All of the entries are read blind. No one knows who wrote which essay until the judging is finished. This keeps the competition entirely merit based," said Horace J. Digby, a past Benchley Society Award winner who has returned to help with judging for the past three years.

The 2008 finalists, in alphabetical order, are:
This years finalists are excited to be selected. Chapman was so inspired to have his work read by Newhart that he shared the following whimsical life ambition: "If I ever become successful enough as a writer to be asked what I consider to be the greatest artistic achievement of Western civilization, I intend to reply, 'Shakespeare's Hamlet, Michelangelo's Pieta, and the Thanksgiving episode from the second Bob Newhart Show." Levy had this to say, "To know that Bob Newhart is reading my essay is a great pleasure. I have been a fan of his since I first saw him on TV doing one of his stand-up routines. To go from accountant to stand-up comic has always been a dream of mine. I guess I'd better start hitting those accounting books." Newhart's selection and ranking of the top four winners for this year's Robert Benchley Society Awards will be announced the week of July 6th. The Robert Benchley Society Award for Humor is an international writing competition dedicated to the warm, self-effacing comic writing style that made Benchley so beloved during his lifetime. Benchley has influenced so many of our most popular and successful comic minds over the past 50 years, said humor writer Ed Tasca, who holds the singular distinction of placing among the top four winning entries for three consecutive years. Many of America’s brightest comic talents including, this year's finalist judge Bob Newhart, Dave Barry, Woody Allen, Steve Martin, Erma Bombeck, Shelly Berman, Jonathan Winters, Richard Pryor, Steve Allen, Russell Baker and Dan Rowan acknowledged Benchley's impact on their work.Benchley rose to fame in the 1920s writing for Harvard Lampoon, The New Yorker, Vanity Fair, Life magazine and as humor columnist for the Hearst newspaper chain. Benchley appeared in more than eighty short films and feature length motion pictures. He is credited, along with Dorothy Parker, with founding the notorious Algonquin Round Table. Benchley and his colleagues, all members of the famed Algonquin Round Table luncheon group, dominated print media for nearly two decades, creating a new face for American humor.This year's preliminary judges include: RBS member Dwain Buck; 2005 Benchley Society award winner Horace J. Digby; author of Robert Benchley An Annotated Bibliography, Gordon E. Ernst; writer and RBS Director, Eileen Forster Keck; puzzle designer RBS Vice Chairman, Chris Morgan; radio personality and chairman of A Moderate State of Preservation Chapter (Ann Arbor, Mich.) of RBS, Tom Saunders; and Robert Benchley Society Chairman David Trumbull. The competition is open to amateurs and professionals alike. W. Bruce Cameron, whose book Eight Simple Rules for Dating My Teenage Daughter inspired John Ritter's Emmy Award winning television series for ABC/Disney, and who's newest book, Eight Simple Rules for Marrying My Daughter, is now in book stores everywhere, took top Benchley Society Award honors in 2006. Last year's top award went to Daniel Montville of Oak Park, Illinois for his hilarious essay, "How to Write a Book."
Posted by Horace J. Digby at 4:20 AM No comments:

The Story Of David Trumbull

Once upon a time there was a little boy named David Trumbull living in Boston. He was a nice boy, good to his mother and small kitties. He wore a bow tie, even in those days,which will give you some idea.
He had a strange attraction to sofas and davenports moving them around the room, hoisting them into strange and wonderful shapes in the living room and searching the libraries and book stores to find items about davenports. He was a strange little kid.
One day he found the report of a man, a man amoung men, a veritable knight of the relm who not only liked davenports, he actually moved one from one house in Boston to another without the owners of the houses or the davenport knowing anything about it.
Here was adventure.............here was romance............here was a possible 15-30 years for home invasion.
Trummy was hooked.
And that, my precious little brats, is how David Trumbull started the Robert Benchley Society.
(It was only much later that Trummy realised that Benchley was a humorous writer, an actor and a great observer of life. Go figure. )
Posted by toms at 10:23 AM 1 comment:

Email ThisBlogThis!Share to TwitterShare to FacebookShare to Pinterest
Labels: Boston

A look inside the Algonquin Hotel, the lobby, and of course, the Round Table itself.
Posted by Kevin Fitzpatrick at 11:37 PM 1 comment: