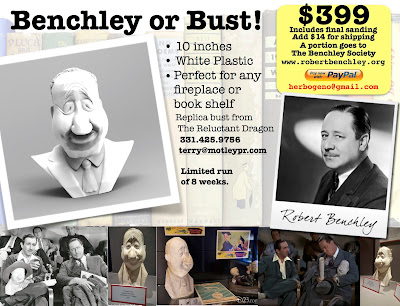 For the Year of the Dog, Nine Dog-Themed Benchley Essays

Posted by David Trumbull at 10:00 AM No comments:

Email ThisBlogThis!Share to TwitterShare to FacebookShare to Pinterest
Labels: Benchley in Print

Celebrating the Year of the Dog - The Lunar New Year Begins Tomorrow, February 16, 2018

How Georgie Dog Gets the Rubbers on the Guest Room Bed, by Robert Benchley (as it appears in "Love Conquers All", the full text of which is available of the RBS website.

How Georgie Dog Gets the Rubbers on the Guest Room Bed

Old Mother Nature gathered all her little pupils about her for the daily lesson in "How the Animals Do the Things They Do." Every day Waldo Lizard, Edna Elephant and Lawrence Walrus came to Mother Nature's school, and there learned all about the useless feats performed by their brother and sister animals.

"Today," said Mother Nature, "we shall find out how it is that Georgie Dog manages to get the muddy rubbers from the hall closet, up the stairs, and onto the nice white bedspread in the guest room. You must be sure to listen carefully and pay strict attention to what Georgie Dog says. Only, don't take too much of it seriously, for Georgie is an awful liar."

And, sure enough, in came Georgie Dog, wagging his entire torso in a paroxysm of camaradarie, although everyone knew that he had no use for Waldo Lizard.

"Tell us, Georgie," said Mother Nature, "how do you do your clever work of rubber-dragging? We would like so much to know. Wouldn't we, children?"

"No, Mother Nature!" came the instant response from the children.

"Well, I'll tell you; it's this way," he said, snapping at a fly. "You have to be very niftig about it. First of all, I lie by the door of the hall closet until I see a nice pair of muddy rubbers kicked into it."

"How muddy ought they to be?" asked Edna Elephant, although little enough use she would have for the information.

"I am glad that you asked that question," replied Georgie. "Personally; I like to have mud on them about the consistency of gurry -- that is, not too wet -- because then it will all drip off on the way upstairs, and not so dry that it scrapes off on the carpet. For we must save it all for the bedspread, you know.

"As soon as the rubbers are safely in the hall closet, I make a great deal of todo about going into the other room, in order to give the impression that there is nothing interesting enough in the hall to keep me there. A good, loud yawn helps to disarm any suspicion of undue excitement. I sometimes even chew a bit of fringe on the sofa and take a scolding for it—anything to draw attention from the rubbers. Then, when everyone is at dinner, I sneak out and drag them forth."

"And how do you manage to take them both at once?" piped up Lawrence Walrus.

"I am glad that you asked that question," said Georgie, "because I was trying to avoid it. You can never guess what the answer is. It is very difficult to take two at a time, and so we usually have to take one and then go back and get the other. I had a cousin once who knew a grip which could be worked on the backs of overshoes, by means of which he could drag two at a time, but he was an exceptionally fine dragger. He once took a pair of rubber boots from the barn into the front room, where a wedding was taking place, and put them on the bride's train. Of course, not one dog in a million could hope to do that.

"Once upstairs, it is quite easy getting them into the guest room, unless the door happens to be shut. Then what do you think I do? I go around through the bath-room window onto the roof, and walk around to the sleeping porch, and climb down into the guest room that way. It is a lot of trouble, but I think that you will agree with me that the results are worth it.

"Climbing up on the bed with the rubbers in my mouth is difficult, but it doesn't make any difference if some of the mud comes off on the side of the bedspread. In fact, it all helps in the final effect. I usually try to smear them around when I get them at last on the spread, and if I can leave one of them on the pillow, I feel that it's a pretty fine little old world, after all. This done, and I am off."

And Georgie Dog suddenly disappeared in official pursuit of an automobile going eighty-five miles an hour.

"So now," said Mother Nature to her little pupils, "we have heard all about Georgie Dog's work. To-morrow we may listen to Lillian Mosquito tell how she makes her voice carry across a room."

Email ThisBlogThis!Share to TwitterShare to FacebookShare to Pinterest
Labels: Benchley in Print, Dogs

Sand is also a good place on which to write, "I love you," as it would be difficult to get into court after several years have passed. -- Robert Benchley, from the essay "All Sandy," and published in No Poems, or Around the World Backwards and Sideways, 1932.

Posted by David Trumbull at 5:48 PM No comments:

Email ThisBlogThis!Share to TwitterShare to FacebookShare to Pinterest
Labels: Holidays

Posted by David Trumbull at 10:50 AM No comments:

See http://www.thurberhouse.org/thurber-prize/
Posted by David Trumbull at 10:51 AM No comments:

1. The New York Public Library launched citywide “Community Conversations.” On January 31 I am speaking at the flagship library on Fifth Avenue and Forty-second Street. The topic is literary New York and the Algonquin Round Table.

3. My book World War I New York: A Guide to the City’s Enduring Ties to the Great War is nominated for an Apple Award by the Guides Association of New York City for Outstanding Achievement in Non-Fiction NYC Book Writing.

Posted by David Trumbull at 10:39 AM No comments:

From the Mail Bag

I have recently published my essay, Robert Benchley's "Cooper Folk Songs," "Typical New Yorkers," and "Real Americans," which just appeared in Western Folklore, Volume 77, Number 1 (Winter 2018). I thought that perhaps this essay might be of interest to you and that you might also wish to inform the members of the Benchley Society of its publication.

It is academic; but I hope not pedantic.

Posted by David Trumbull at 3:51 PM No comments:

A SPECIMEN OF RECENT CORRESPONDENCE WITH THIS OFFICE

You make that way too complicated. I get the I'm not a Robot stuff, but how many vehicles do I have to find?! Give up...

We regret that you had a less than satisfactory experience posting comments on the RBS blog. We appreciate your interest in the work of the Society and value your comments. In the future you should be aware that the Google procedure to prove you are not a robot can be by-passed if you apply and are accepted into the Robert Benchley Society Humor Easy Pass ™.

Per regulation 26(b) of 1974 and Executive Order 42865-5, applications for the Robert Benchley Society Humor Easy Pass must be filed in triplicate with the DEPARTMENT OF STATE, Bureau of Internal/External Affairs, Office of Literary-historical persons (fictional/nonfictional), Room 314-b, Washington, D.C. 20205-6978 using form SF-105-b(1) available electronically from the OFFICE OF MANAGEMENT AND BUDGET. All request must include original card/certificate, proof of identity as required by (a) or (b) below:

(a) Primary proof of Identity

(b) Secondary proof of Identity

A valid U.S. passport issued earlier than December 19, 2017 accompanied by long form statement of live birth, affidavit from a relative within two degrees of consanguinity who has known you your entire life, affidavit from local Chief of Police in the city/town of our primary residence stating that there are no outstanding warrants for your arrest.

Due to the high number of requests processed by this office the expected processing time is 7.5 years. Should you need the Robert Benchley Society Humor Easy Pass sooner you may apply for hardship expedited service by submitting form EF-9566-a(4) accompanied by the processing fee of $125. The current waiting time for expedited hardship service is 15.2 years.

Posted by David Trumbull at 2:41 PM No comments:

Posted by David Trumbull at 12:03 PM No comments:

Email ThisBlogThis!Share to TwitterShare to FacebookShare to Pinterest
Labels: Bombeck

RBS member Matthew Hahn has released his latest book, "The Animated Marx Brothers" through BearManor Media! <>This intertwined history of The Marx Brothers and animation, includes not only theatrical, television, and made-for-video cartoons, but also fan films, commercials, credit sequences, flip books, avatars, emoji, a slot machine, and two long-lost pilots once so rare their very existence was in doubt! More info or to buy the book visit www.bearmanormedia.com.
Posted by David Trumbull at 11:32 AM No comments: