Reminder, Friday, August 30th, is the Deadline to Submit Your Winning Essay

The deadline to enter the 2013 competition for the Robert Benchley Society Humor Award is August 30, 2013. For more details or to enter click here. The award ceremony will in Boston, November 22 - 24, 2013. This year's theme is "You Can Aways Tell a Harvard Man..." Now, to get you in the mood for Boston --
Posted by David Trumbull at 12:15 PM No comments:

Remember, your entries for the 2013 Robert Benchley Society Annual Award for Humor Writing are due by Friday, August 30th. And now, for something completely different --
Posted by David Trumbull at 2:27 PM No comments:

The deadline to enter the 2013 competition for the Robert Benchley Society Humor Award is August 30, 2013.

The deadline to enter the 2013 competition for the Robert Benchley Society Humor Award is August 30, 2013. For more details or to enter click here. The award ceremony will in Boston, November 22 - 24, 2013. This year's theme is "You Can Aways Tell a Harvard Man..." Now, for a song from another very funny Harvard man, Tom Lehrer.

Speaking of college football, his an excerpt from Mr. Benchley's "Football; Courtesy fo Mr. Morse," from :Of All Things (1921)

Sunday morning these fine fall days are taken up with reading about the "40,000 football enthusiasts" or the "gaily-bedecked crowd of 60,000 that watched the game on Saturday." And so they probably did, unless there were enough men in big fur coats who jumped up at every play and yelled "Now we're off!" thus obstructing the view of an appreciable percentage.

But why stop at the mention of the paltry 50,000 who sat in the Bowl or the Stadium? Why forget the twice 50,000 all over the country, in Chicago, St. Louis, San Francisco, Atlanta, who watched the same game over the ticker, or sat in a smoke-fogged room listening to telegraphic announcements, play by play, or who even stood on the curbing in front of a newspaper office and watched an impartial employee shove a little yellow ball along a black-board, usually indicating the direction in which the real football was not going. Since it is so important to give the exact number of people who saw the game, why not do the thing up right and say: "Returns which are now coming in from the Middle West, with some of the rural districts still to be heard from, indicate that at least 145,566 people watched the Yale-Princeton football game yesterday. Secretary Dinwoodie of the San Francisco Yale Club telegraphed late last night that the final count in that city would probably swell the total to a round 150,395. This is, or will be, the largest crowd that ever assembled in one country to watch a football game."

Posted by David Trumbull at 1:17 PM No comments:

You can always tell a Harvard man... 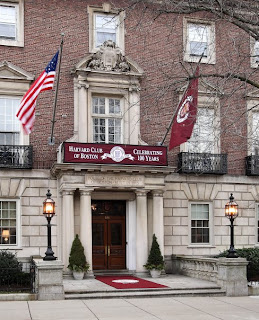 The "You Can Always Tell a Harvard Man" theme will continue throughout the Friday, November 22, through Sunday, November 24, Tenth Annual Gathering of the Robert Benchley Society. In addition to the black tie awards dinner at the Main Clubhouse, we'll also enjoy the fabulous 38th floor views of Boston, high a-top the modern sky-scraper in the Financial District that houses the Downtown Clubhouse of the Harvard Club at One Federal Street. Save the date and prepare to come to Boston, the "Hub of the Universe" for this fun weekend being planned by the Boston "We've Come for the Davenport" Chapter of the Robert Benchley Society.

Posted by David Trumbull at 3:28 PM No comments: