The Short Answer is...

The following inquiry just came in by carrier pigeon:

They're not referring to the Benchley short subject, are they? Do you have any idea?


Funny you should ask just now. With the "Oscars" being awarded recently, there was an article in Smithsonian (http://blogs.smithsonianmag.com/movies/2012/02/what-ever-happened-to-the-short-film/ that addresses the issue, although not that specific film. Indeed, short subjects were big business in the golden age of Hollywood and did sometimes exceed the box office gross of the feature films. So the short answer is, yes, assuming the the Wikipedia entry is correct, then Robert Benchley's short, "How to be a Detective" was the highest grossing picture of 1936. 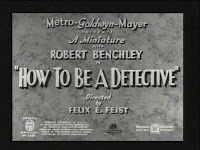 For more information on, or to buy, Robert Benchley short subjects, see our website at http://www.robertbenchley.org/sob/shorts.htm.
Posted by David Trumbull at 10:51 AM

Email ThisBlogThis!Share to TwitterShare to FacebookShare to Pinterest
Labels: Benchley in the Movies, Inquiries