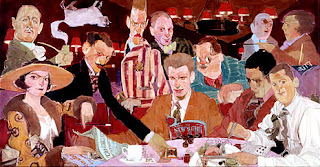 The Algonquin Hotel in NYC, is famous for the Algonquin Round Table mural painted by Natalie Ascencios, which depicts "the Vicious Circle" of columnists, playwrights, and novelists; such as, Franklin Pierce Adams, Robert Benchley, Heywood Broun, Marc Connelly, George S. Kaufman, Dorothy Parker, Harold Ross, Robert E. Sherwood, John Peter Toohey, and Alexander Woollcott, who conducted important business in the Rose Room. Much of the agenda focused on the proper combination of gin mixed with vermouth and olives, and how to hail a cab.

Members of the vicious circle were immortalized in Aviva Slesin’s Academy Award-winning documentary, The Ten Year Lunch; lunches that spanned from 1919 to 1929. The New Yorker Magazine was born at the Algonquin, Orson Wells honeymooned there, William Faulkner wrote the first draft of his Nobel Prize acceptance speech there, composers Frederick Loewe and Alan Jay Lerner created songs there for “Brigadoon” and “My Fair Lady;” and yet, taking the bull by the horns to hail a cab was still a matter of concern.

In other words, “We call ourselves a free nation, and yet we let ourselves be told what cabs we can and can't take by a man at a hotel door, simply because he has a drum major's uniform on.” ~ Robert Benchley
Posted by Rose A. Valenta at 8:43 AM