Was Bob Benchley a Gleek? 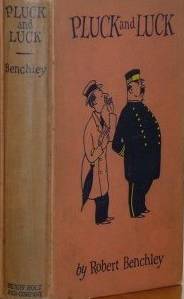 Someone wrote to the Robert Benchley Society, saying:


A puzzle is driving me bonkers. Years ago I read a piece by Robert Benchley that totally fractured me. I do not remember in which published work I found it.

The subject of the piece was college GLEE CLUBS.

Desirous of reading this again, I have been scouring various Benchley works in the public library...... but I do not find this piece. Does it ring a bell with you? Do you know in which book it appears?

Readers may also be interested to know that the piece appears to be a "take-off" on actual reviews of the Harvard Musical Clubs' Concert, such as this one published in the Harvard Crimson of May 15, 1902 (http://www.thecrimson.com/article/1902/5/15/the-musical-clubs-concert-pthe-concert/?print=1) which reads:


The concert given by the University Glee, Mandolin, and Banjo Clubs last night in Sanders Theatre for the benefit of the Social Service Committee was very successful. About five hundred people including the crew, the baseball team, and the track team attended. The programme was on the whole well rendered, and several of the numbers deserve special mention. "Creole Belles" was well played by the BanjoClub and the execution of selections from the "Show Girl" and the "Serenade" by the Mandolin Club, was exceptionally good. "Mammy Loo" and "Schneider's Band" by the Glee Club, were encored with enthusiasm.

Email ThisBlogThis!Share to TwitterShare to FacebookShare to Pinterest
Labels: Benchley in Print, Inquiries