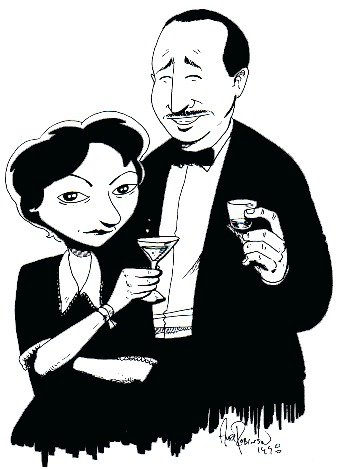 Drawing of Dorothy Parker and Robert Benchley by Alex Robinson.

Alex Robinson was born in the Bronx on 8 August. He grew up in Yorktown Heights, New York where he graduated high school in 1987. His first job upon graduation was washing dishes in a gourmet deli and it was while working there he decided that maybe college was a pretty good idea after all.

He spent one year at SUNY Brockport and then transferred to an art school in New York City, where he majored in cartooning. Among his teachers were Will Eisner, Andre LeBlanc, Sal Amendola and Gahan Wilson. In his sophomore year he got a job at a bookstore, where he continued to work for seven long years.

After graduating from art school, Alex began doing mini comics (small print run comics xeroxed and stapled by himself). He soon started working on the story that would become his first graphic novel, Box Office Poison.

In 1996, Antarctic Press started publishing the serialized version of Box Office Poison. The series ran for twenty-one issues, and once the story was complete, Top Shelf Productions published the entire thing in one 608 page book. Shortly after the book was published, Alex won the Eisner Award for Talent Deserving of Wider Recognition.

Although Box Office Poison was nominated for several awards (a Harvey, an Eisner, an Ignatz and the Firecracker book award) it failed to take home a single prize. Pathetic. Alex bitterly got to work on a second book.

2005 got off to a great start when the French translation of Box Office Poison won the prestigious Prix du Premier Album award in Angouleme, France. August finally saw the release of Tricked, which Top Shelf announced was going to a second printing in November.

In 2006, Tricked lost the Eisner Award for Best Graphic Novel, but managed to win a Harvey and Ignatz Award. This year also so Astiberri in Spain release both of his graphic novels in handsome, one volume editions.

Alex has expanded his storytelling to include fantasy, with the release of Alex Robinson's LOWER REGIONS (2007), the time travel/high school drama Too Cool to Be Forgotten (2008, winner of the Harvey Award for Best Graphic Album-original) and an adaptation of L. Frank Baum's A Kidnapped Santa Claus (2009).

He currently lives in New York City with his wife Kristen and their pets, Krimpet and Wrigley.

Learn more about Mr. Robinson at www.comicbookalex.com
Posted by David Trumbull at 8:01 AM