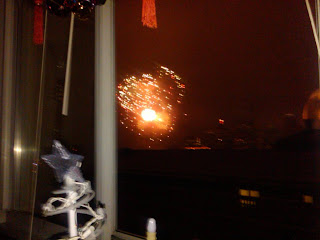 Well, happy birthday to you, Nicole, whoever you are. It's not everyone whose birthday celebration includes a fireworks display big enough to be seen by the citizens of two nations -- Americans in Detroit and Canadians to the south in Windsor, Ontario, on the other side of that international boundary, the Detroit River.

I live in Boston, on the top of Beacon Hill, with views to both the Charles River and Boston Harbor, two popular fireworks venues. Our Fourth of July fireworks over the Charles are well-known from the national television broadcast. Major public festivities in Boston -- arrival of the Tall Ships, First Night (New Year's Eve), and other civic celebrations -- include fireworks over the harbor. Public fireworks displays from time to time through the year is just one of the benefits of city living. An added benefit is watching legal private fireworks displays, such as last week's over the Charles in celebration of the centenary of the founding of Massachusetts Institute of Technology. I'm not an M.I.T. man, nor did I attend the high-priced fireworks-watching party across the river in Cambridge, but I had just as good a view for free. Similarly with fireworks last summer over the harbor for the wedding of persons I never heard of.

Who is Nicole Cerrito? Who are these private citizens who can afford huge fireworks displays for birthdays or weddings? They certainly aren't any of the people I know. Nor likely, reader, are they persons you know. They are total strangers with a lot of money (bully for them!) who celebrate the mileposts of life -- birthdays, anniversaries, weddings -- in a big way, so big that they share it with the rest of us within viewing area of the skies, which are free. I think that's grand! And to all Robert Benchley fans in Detroit or Windsor Saturday night, I suggest you get down to the the waterfront, watch Nicole's fireworks, and raise a glass in her honor.
Posted by David Trumbull at 9:56 AM