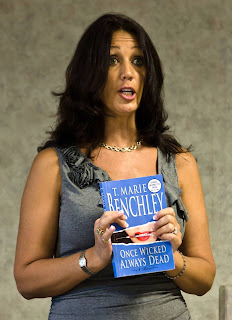 (Los Angeles CA, February 22, 2011) -- The film will begin principal photography following the adaptation of “Once Wicked, Always Dead,” by Jim Fitzpatrick and thriller-writer T. Marie Benchley, relative of Peter Benchley. Under the direction of Jim Fitzpatrick, the team will Write & Produce the project under the PacAtlantic Pictures banner. Fitzpatrick’s PacAtlantic has relationships with all of the top Studios in Hollywood and currently the helmer has three projects connected with several for distribution, including MGM which will release the feature film “A Fonder Heart,” starring Daryl Hannah, James Brolin and Stockard Channing, due out this fall of 2011.

Fitzpatrick stated during the interview that “Once Wicked, Always Dead,” will be a romantic suspense-filled-mystery, that will take you on a rollercoaster ride of emotion and will give you mental whiplash! The film will be great, because the book is filled with love, loss, betrayal and murder.”

For more information go to http://www.tmariebenchley.com/tbenchley-news.htm.
Posted by David Trumbull at 10:55 AM