In Response to Your Inquiry

In reposnse to your inquiry, "What happens to the judges scorecards after the results of the Robert Benchley Society Humor Writing Competition are announced?" 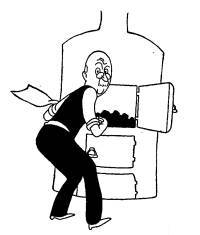 In accordance with new Patriot Act regulations --U.S.C. 937 Sec 3460 (a)450b(c)6-- copies must be submitted, in triplicate to the Department of Homeland Security, the Internal Revenue Service, and the Office of the White House Tour Guides. Such copies are classified secret, modified handling allowed, per order SO-101-5 Secretary of the Interior Bureau of Indian Affairs. They must also be submitted, in electronic format (WordPerfect v6.0 or higher) to the NSA, FBI, CIA, LSMFT, and to that lady who works in the building across the street (you know, the one who brings in the home-made cookies on casual Fridays). Copies must be maintained for a period of five (7) years. After which all copies, including the electronic ones, must be cross shredded (after being cross referenced, or vise-versa) in compliance with Executive Order 2002-402, and disposed in government landfill G-WV-003-21, in Wheeling, West (by God) Virginia.
Posted by David Trumbull at 8:27 AM

In addition, with reference to the United Kingdoms "Royal Secrets Act" (House of Lords E-22304/1977;Commons LB-T 33459920/224 Sec 455 Sub 1a); Any and all Intelligent information gathered by MI5 or their sub sections, will be filed with this agency and the approproate Allies (Allies Intelligent Act- alowing that they may have some), to whit: Information gathered under the British Security Statutes will be shared with Allies who are polite and have a good attitude.