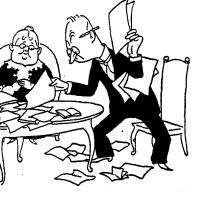 According to information on the Syracuse University Library website:


Gluyas Williams (1888-1982) was an American cartoonist. Born in San Francisco, California, he received his A.B. from Harvard University in 1911 and, in 1915, married Margaret Kempton.

Mr. William's drawings include book illustrations, magazine cartoons and daily newspaper cartoons. He has illustrated many of Robert Benchley's books, William Freeman's Hear! Hear!, Corey Ford's How to Guess Your Age and Edward Streeter's Father of the Bride. He has also done many drawings for magazines such as Cosmopolitan, Life, and the New Yorker, contributing to the latter his famous "Wedding Series". From 1922 to 1947, Williams drew daily newspaper cartoons that were published through the Bell Syndicate in various newspapers in the United States, England, Australia and other nations.