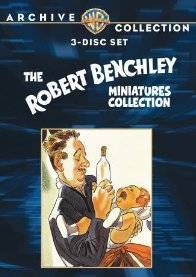 From the pages of Vanity Fair and The New Yorker to a seat among the wits at the Algonquin Round Table to movie screens nationwide, Robert Benchley cut quite the funny figure. And never more so than in the short subject series the humorist made at MGM from 1935 to 1944, gathered here in a complete - and completely uproarious - 3-Disc Collection of 30 Theatrical Shorts. The writer adopted a common-man persona to investigate and comment on the challenges of daily living and scored the first time out: his debut short How to Sleep won an Academy Award?. And whether trying to figure income taxes, enjoy a movie, train a dog, take a nap or tackle many other daunting situations, the beloved comic master's foibles have always delighted and influenced generations of funnymen and -women who followed.

For more information or to order see the Robert Benchley Society website at www.robertbenchley.org/shop.
Posted by David Trumbull at 10:43 PM

Email ThisBlogThis!Share to TwitterShare to FacebookShare to Pinterest
Labels: Video