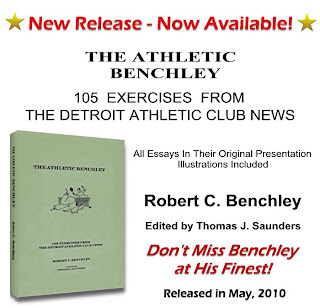 Robert Benchley, America’s greatest humorist, was famous for being one of the members of the Algonquin Round Table and for writing hysterical pieces for Vanity Fair, Life, and many other publications. He was the Drama Critic for Life for years and his reviews of plays were required reading for the New York theater public. He went on to make many movies with a list of Hollywood stars that no one else could claim and was known for his books of short hilarious articles.

These articles, in their original presentation and with the original artwork, are sure to recruit new fans for the Master of Nonsense. Famous pieces in their original form are here along with articles that have never before been seen outside the membership of the DAC., such as:


The Athletic Benchley is expected to be available for the first time during May, 2010

Edited by Thomas Saunders, chairman of the "A Moderate State of Preservation" Ann Arbor, Mich. chapter of the Robert Benchley Society.

Email ThisBlogThis!Share to TwitterShare to FacebookShare to Pinterest
Labels: Writers